Tech used in this project:

My favorite jersey design project this year HAS to have been Team Rainbow Sparkle Unicorn Love Magic!! At first I was overwhelmed. How in the world was I going to fit all those elements into a jersey? Well, as soon as I sat down with Illustrator, it just flowed. I sent the first draft to the team captain, and a few minutes later realized it needed more “sparkles”. I emailed him to wait to show it, because I was adding more sprakles and he wrote back “OMG! My favorite designer ever! More Sparkles!!” Apparently they had folks stopping them along the AIDS LifeCycle route asking what it would cost to take the jersey off their back right then! I hear they’ll be selling them this year as a fundraiser. 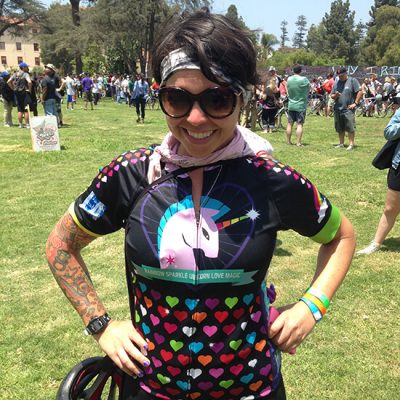 Ready to chat about how ThePixelPixie can help?
Let's Get Started...
© 2000-2021 Copyright Laura Sage, aka ThePixelPixie.